Bollywood upcoming film Thugs Of Hindostan movie advance booking has started in UAE at selected theaters. Though, its still lot of time remaining for the release of TOH, but this also proves the anticipation of this film in UAE.

Interestingly, the screen time is visible in the advance booking section of uae.voxcinemas.com, which is 190 minutes. Yes, this film is 3 hours 10 minutes long and it would be interesting to see how audience approach to this magnum opus film. 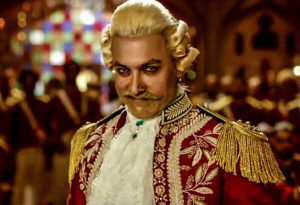 One thing is sure that Aamir Khan never disappoint their fans with his movies, his character of Firangi Mallah is unique and interesting. Well, he will be seen along with Megastar Amitabh Bachchan, which is also a major USP of this film, to see the duo for the first time together. This film also stars Fatima Sana Shaikh and Katrina Kaif in key roles.

This film has late night shows in UAE till 2.30 am and that is incredible. All the shows that will begin in UAE will start from 9.30 am. This film is being made on an epic scale and it will certainly touch the heart audience across the world. Directed by Vijay Krishna Acharya, this film is set to release on November 8, 2018 worldwide. That means no Thursday release for Thugs Of Hindostan In UAE.