We know a lot about Sunil Grover and Kapil Sharma, who used to work together on The Kapil Sharma Show. They were good friends but the fight between the two has changed the whole scenario. Now, Sunil is not on Kapil Sharma’s show but he is still in contact with him. At the latest, Sunil Grover also sends his best wishes for Kapil Sharma’s upcoming film Firangi. 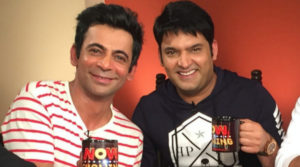 In a twitter live chat, one of the fans asked Sunil Grover about Kapil’s upcoming film Firangi. In return, Sunil Grover says, “All The Best.” Well, this seems like he has no problem with Kapil Sharma but still, he doesn’t want to be a part of his show.

In the recent past, Kapil Sharma tried his best to bring Sunil Grover in the show, but he refused it in a big way. Now, Sunil mostly does live performances for his bread and butter. There are chances that, Sunil Grover will turn a host for The Great Indian Laughter Challenge, which will be judged by Akshay Kumar.

Meanwhile, we have seen that Kapil Sharma has wished Sunil Grover on his birthday. In return, Sunil also responded saying to take care of his health. We know that Kapil is taking stress due to the low TRP of The Kapil Sharma Show. Kapil Sharma’s next film Firangi is set to release on November 10, 2017.

Anyways, we just want to see them together as they are amazing talent and look good together.