Bollywood Singer Bhoomi Trivedi known for movies and songs like “Ram Chahe Leela”, “Husn Parcham” from Zero and many other hit songs was present at the grand holi party and celebration at Rang Rave event in Mumbai.

Organised by Falcon Multimedia Pvt Ltd, Mumbaikers burst the colours in the city’s most premium Holi bash – Rang Rave. The event was star gracing at Goregaon’s Nesco ground. The audience thoroughly enjoyed with world class DJ’s such as Nyk, Rink, Madoc, Nelson, Sunny and the SpinDoctor. Where the live bhangra dhol and thandai added traditional touch – DJ & rain dance added the modern feel to this grand celebration of the festival. 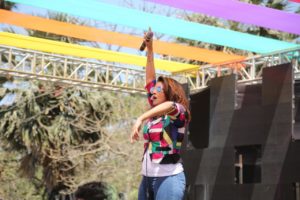 The event was organised by Falcon Multimedia PVT LTD, presented by Falcon Facility Management pvt ltd. and powered by Beck’s Ice and supported by go.Celebs had more than five thousand footfalls in this coloured full musical festive event. The organisers took all kind of safety precautions for the audience with having organic colours which are totally harmless. Organiser and MD of Falcon Group, Mr Anil Manohar shares, “Holi is India’s traditional event and we tried to create an environment for audience where they get everything under one roof.” 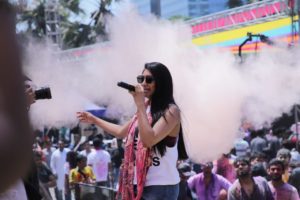 Well, while interacting with media, singer Bhoomi Trivedi shares about her new track and says, “Holi is my favourite festival including Navratri also. I’m always excited to perform on both the festivals. I’m excited to launch Aavi Gayi Holi at Rang Rave which is an hip-hop Gujarati Rap song ft by The Spin Doctor.”