Ranbir Kapoor was last seen in Jagga Jasoos, almost a year ago and now he is back with a bang in Sanju movie. At the latest, the makers has released the first poster and official teaser of Sanju, which is breathtaking. 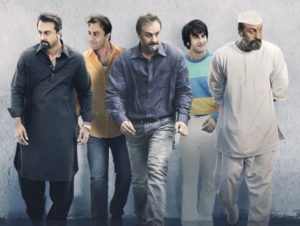 He was prepping up for Sanju for over 18 months and now his film is set to release on June 29, 2018. In this film, Ranbir Kapoor has played Sanjay Dutt’s role from his young days till now. He has changed his looks, physique and behavior to be in Sanjay Dutt’s shoes.

Govinda Thanks Rishi Kapoor For Supporting Him Over Jagga Jasoos Row

Sanju teaser looks charasmatic and effective. The way Ranbir Kapoor depited Sanjay Dutt is way beyond words. It won’t be wrong, if he will take big awards this year at his home. Directed by Rajkumar Hirani, this film also stars Paresh Rawal, Dia Mirza, Boman Irani, Anushka Sharma, Karishma Tanna and many more.

In this teaser, Sanjay Dutt’s life has been showcased in a jolly way which is a good take on his life. Sanjay’s life is no less than a Bollywood movie and certainly it will become a big hit.