Finally, it is clear that Salman Khan is all set to romance with south beauty Pooja Hegde, who debuted in Bollywood with Mohenjo Daro and last seen in Housefull 4. She was last seen in Allu Arjun starrer Telugu film Ala Vaikunthapurramloo which turned out to be a big hit.

As per the Bollywood producer Sajid Nadiadwala told to Mumbai Mirror, “Having worked with Pooja in Houseful’ 4, we felt she was a perfect fit for this film. She has an amazing screen presence and will make for a good pair with Salman. They will bring freshness to the story.” 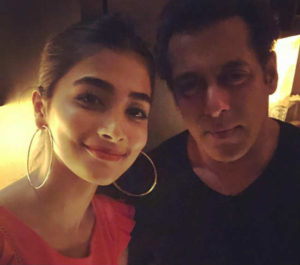 On the work front, Salman Khan is currently hosting Bigg Boss season 13 alongside working on his next project Radhe, which is set to hit the theaters on May 22, 2020. Radhe will also face a stiff clash with Laxmmi Bomb and Fast And Furious 9 at the box office. After Radhe, Bhaijaan will seriously get busy with Kabhi Eid Kabhi Diwali film, which is touted to be a family entertainer.  Despite that, the film will have ample action scenes to please Salman Khan fans. This film is all set to release on Eid 20201.

In the recent past, Salman Khan couldn’t able to give big hits with Race 3, Bharat or with Dabangg 3. So it is extremely important that he should come up with good movies that works well at the box office.