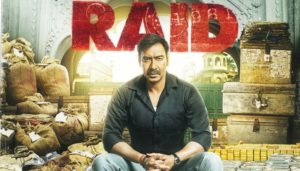 Directed by Raj Kumar Gupta, Raid movie got released in India in 3400 screens and 369 screens in the overseas market. This film will now face a stiff clash with Hichki movie, which is releasing on March 23, 2018.

The story of Raid is based on a real life story, where Ajay essays the role of an Income Tax Officer and Saurabh Shukla as a corrupt politician. The buzz around Raid film wasn’t very strong before the release, but it has been well received by the masses.

Altogether, Raid has a good chance to cross 100 crores at the box office in India.