Raazi movie has completed three days at the box office and the collections are way better than the expectations. The big reason why this movie is performing so well is the strong content. Add up to that, Alia Bhatt, Vicky Kaushal has performed brilliantly in this movie. 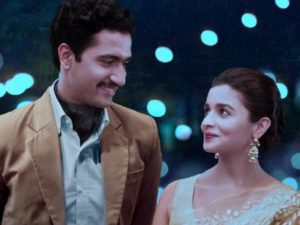 Made with around 30 crores budget, Raazi movie is already in the profitable run. Released in over 2000 screens in India, Raazi movie has collected 7.53 crores on day 1, followed by 11.30 crores on day 2. The third day earning was 14.11 crores, which takes the three days total to 32.94 crores.

These 3 Films Made Aamir Khan A Global Bollywood Star

Right from Bollywood critics to audience, everyone is amazed with Raazi film. This film was based on the novel Calling Sehmat written by Harinder Sikka. Raazi music was incredible and heart touching, which was rendered by  Shankar–Ehsaan–Loy and the lyrics were written by Gulzar. Directed by Meghna Gulzar, this film was produced by Junglee Pictures and Dharma Productions.

Meanwhile, Raazi is doing amazing collection and is all set to become a superhit film.