Vashu Bhagnani’s Pooja Entertainment has been entertaining the audience since decades and now the legacy of is being taken forward by the filmmaker’s children, Deepshikha Deshmukh and Jackky Bhagnani.

Under this banner, the brother-sister duo has already created a strong and diverse base with their upcoming films. With a packed year ahead, the audience is all set to see this new phase of Pooja Entertainment which is rich in content as well as has a powerful entertainment value to it.

The new year will begin with a quirky comedy drama, Jawaani Jaaneman. The film stars Saif Ali Khan, Alaia F and Tabu. Shot majorly in London, UK the film has already intrigued the audience with its casting coupe and is gearing up for a 31st January, 2020 release.

From a slice-of-comedy, to an out-and-out entertainer, the banner also has Varun Dhawan and Sara Ali Khan’s Coolie No. 1. The production house came a full circle as they started in 1995 in collaboration with David Dhawan for the original version of the film. Ever since the film was announced, the anticipation among the audience has been high. With the glimpses the team of the film has been sharing via social media, the fans are looking forward to the release of this much awaited film. Marking 25 years of Pooja Entertainment in the film world, Coolie No. 1 will release on May 1, 2020. 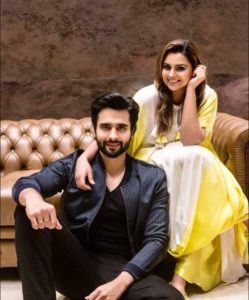 The producers have a long-term plan to generate strong content which will follow from 2020 to 2021 too. The recently announced Akshay Kumar-starrer spy-thriller Bell Bottom is also being made under the banner of Pooja Entertainment.

Elaborating on the full-slate they currently have, producer Deepshikha Deshmukh says, “Our dad has shown us by practice, how to be part of this world and what it takes to be a filmmaker. People think that producing a film is just about the finances but it is so much more. We are so excited to be developing interesting stories that we already have on our plate along with many others that are currently in nascent stages”

Actor-producer Jackky Bhagnani says,
“We are working with new directors and writers, seeing the kinds of new elements, diversified stories that can be explored today. With these films, we already have our hands full but there is not only always room but also respect for good content in Pooja Entertainment.”

Deepshikha Deshmukh and Jackky Bhagnani have come together to bring about a fresh version of the production house which has the same values, brings in the experience but adds a unique take on the films that are being made today.