Ratna Pathak Shah Starring female centric movie Lipstick Under My Burkha is rock steady at the Box Office. At the latest, the day 6 box office collection is out now and it is certainly an unexpected collection. 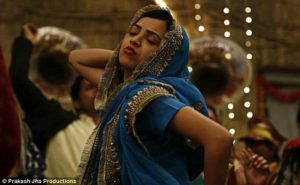 Produced by Prakash Jha, the film was being made in a minimum budget of 6.5 crores and you will be surprised that it has already recovered its budget in the first few days. Normal, weekdays, films do earn less money as compare to Weekends but this is not the same case for Lipstick Under My Burkha film.

Presented by Ekta Kapoor’s Balaji Motion Pictures, Lipstick Under My Burkha has able to churn out good money at the silver screen. On Friday it has earned 1.22 crores, Saturday earning was 2.17 crores. The collection further escalated on Sunday, where it has collected 2.41 crores. Monday – 1.28 crores, Tuesday – 1.36 crores, Wednesday – 1.27 crores. This has made the total of the film 9.71 crores.

Altogether, Lipstick Under My Burkha is a pathbreaking film and it will end its lifetime earning over 15 crores for sure.

What are your thoughts about Lipstick Under My Burkha collection? do let us know in the comments.