The Kapil Sharma Show has been on the air for over a year on Sony Channel. But from last 5 months, a lot has been going on the show. Well, Sunil Grover’s exit has really cost the show almost an end but luckily the channel is not ready to call it a quit. At the latest, we heard that to regain the TRP of the show, The Kapil Sharma Show will get a big makeover. 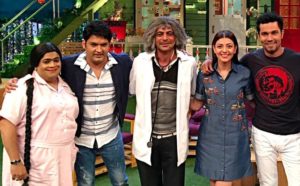 According to a source close to Kapil’s team said, “The current format has run its course. Sunil Grover and Ali Asgar’s departure and Bharati Singh and Chandan Prabhakar’s re-entry are not the issues. We’ve realized that the entire show needs a revamp.”

Taking about Sunil Grover, the source said, “He (Sunil) is welcome if he wants to return, but no one is sending out feelers to him; least of all Kapil.”

When asked about Kapil Sharma’s health, the source concluded saying, “He spends close to six hours recording for The Kapil Sharma Show and then tries to shoot for his film, Firang. The film is not going anywhere. It is a dead weight..”

These clearly means that due to a lot of work, he is not getting time to get relax and that’s why things taking a toll on his health. He must realize that Health is wealth and he better don’t play with it.

Altogether, The Kapil Sharma Show actually need a makeover to lure the audience and get TRP back on track.