After Bang Bang, Hrithik Roshan is all set to entertain the audience with an action flick starring him along with Tiger Shroff. At the latest, the makers have roped in Befikre girl Vaani Kapoor to be the main lead in this film. 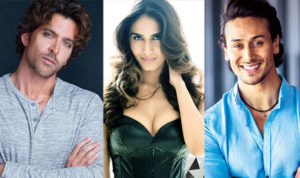 Yes, that absolutely means that Vaani Kapoor to romance with Hrithik Roshan in the untitled action film. Vaani has earlier worked in just two films Shuddh Desi Romance and Befikre. Both the films failed to impress the audience. Interestingly, all three films of Vaani Kapoor are being backed by Yash Raj Films.

Confirming the news, Siddharth Anand said, “While the film is primarily Hrithik vs Tiger, there is only one girl in the film who is opposite Hrithik. I was looking for young and fresh energy in the casting and I have found that in Vaani Kapoor. I have loved Vaani as an actor in both her films and after meeting her I was fully convinced that she is the best girl for my film.”

We know that Tiger and Hrithik have an amazing body, and it would be great to see them in action. The film is slated to hit the theaters on January 25, 2019.