Irrfan Khan starring Hindi Medium is doing amazing collections in China and seen over 80 percent growth in earning on day 2. Released on April 4, 2018, Saket Chaudhary directorial film is on its way to enter 100 crores very soon. 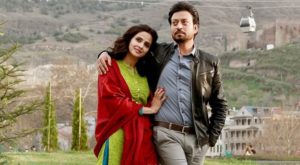 Salman Khan To Romance With Deepika Padukone In Kick 2

This film holds second position at the box office in China, since it’s release. It is behind Hollywood film Ready Player one, which has till now earned over $ 118.87 million – 772.59 crores in China. Steven Spielberg film has now become the biggest imported earning film in China, by breaking Secret Superstar lifetime record in China, which was 118.54 million – 770.56 crores.

Irrfan Khan film is based on a serious topic of children education and how schools have become a business place rather than just serving education. This is a relatable topic to Chinese audience and that’s why they have connected with this film easily.

Altogether, Hindi Medium is all set to be one of the biggest Bollywood earning films in China. It may overtake PK (129 crores) and Bajrangi Bhaijaan (295 crores) collection in China.