Ajay Devgn starring Golmaal Again is all set to become the biggest hit of 2017 in the days to come. Recently, this film has crossed 100 crores mark at the box office and now it has begun to shatter some box office records. At the latest, Golmaal Again has broken Badrinath Ki Dulhania’s lifetime record. 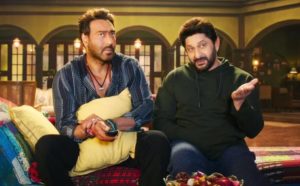 On the fifth day, Golmaal Again has collected 13.25 crores, which makes the overall collection to 116.89 crores. This was enough to push behind Badrinath Ki Dulhania, which has collected 116.60 crores in its lifetime.

Ajay Devgn’s movie has been well received by fans across the world. Released in over 3500 screens in India, this film is getting a pan India response. They are very few movies which succeed in all the circuits and Golmaal Again is one of them.

Directed by Rohit Shetty, this film also stars Arshad Warsi, Tusshar Kapoor, Shreyas Talpade, Kunal Khemu, Neil Nitin Mukesh, Prakash Raj, Tabu and Parineeti Chopra in key roles. This is the fourth film in the Golmaal Series and is all set to become the biggest hit.

Altogether, Golmaal Again will soon become the highest grossing movie of Bollywood in 2017.