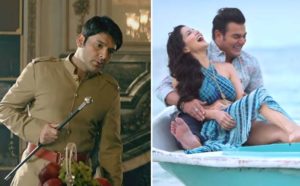 Kapil Sharma’s film Firangi has started slow on the first day but it has picked some growth on the second day. On the first day, it has earned 2.10 crores and the second-day collection is around 2.40 crores, which makes the collection total to 4.50 crores in 2 days. Made with over 22 crores budget, Firangi got a release in less than 1000 screens in India. Directed by Rajiev Dhingra, Firangi also stars Ishita Dutta and Monica Gill in key roles.

The second release of this week is Sunny leone’s Tera Intezaar, which has collected just 45 lakhs on the first day. The second-day collection of this movie was around 55 lakhs. That makes this film collection for 1 crores till now. It got released on over 1000 screens.

If we talk a look at both these films, they didn’t perform well as per the expectations. Even the Bollywood critics review is not good for both the films. Now, let’s see how this film performs in the first week.