One of the most awaited films of Salman Khan is Dabangg 3, which is all set to go on floors in Mid 2018. The news is being confirmed by the Creative head of Dabangg 3, Arbaaz Khan. As per him, the film will roll out in the mid of this year. 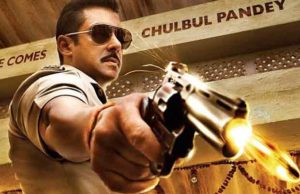 The first part of Dabangg series was released in 2010 and it was directed by Abhinav Kashyap. The film was a hit and followed by a sequel in 2012, which was helmed by Arbaaz Khan himself. Well, this time he has cleared the air that this film will be directed by Prabhudeva. We all know that Prabhudeva has given a big hit Wanted with Salman Khan and he could easily recreate the magic again with Bhaijaan.

Lately, Arbaaz Khan was spotted by media in one of the Bollywood Events, where they questioned him about his upcoming works. Talking about it, Arbaaz told, “I am concentrating on ‘Dabangg 3’ which will go on floors mid this year. After that, I will have more time because ‘Dabangg 3’ will take the lot of my time, effort and concentration.”

Post-Dabangg 3, Arbaaz wishes to make web series and other digital content for the viewers. Now the question is, will Dabangg 3 get a release in 2018 or not?