Salman Khan starring Bajrangi Bhaijaan film is slowly picking it up at the box office in China. The advance booking of this film has started from February 6 and till now it has shown a great response from the Chinese audience. 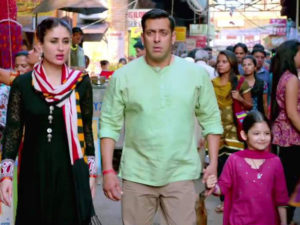 Bajrangi Bhaijaan will face a big clash with Chinese film Girls 2, which is the sequel of Girls, released in 2014. I have seen its first part and I am sure that, Girls 2 will be much more bigger and better film. It is a female-centric film but still has a lot to offer for all kinds of audience. On Maoyan ticket booking Chinese site, 2.23 lakhs want to see Girls 2 in theaters, whereas over 15 thousand people want to watch Salman Khan film.

If we talk about the advance booking status on english.entgroup.cn, it is clear that Bajrangi Bhaijaan is in the fourth position now. Kabir Khan directorial film has received 2755 admissions till now and got over 1489 shows. Girls 2 received 65158 admissions and 13378 shows till now. There are still 10 days remaining for Bajrangi Bhaijaan release in the mainland China, which is scheduled for March 2, 2018.

Apart from Girls 2, Bajrangi Bhaijaan will also face a clash with Peter Rabbit and 3 Billboards Outside Ebbing, Missouri, which were released on the same day. Moreover,  Detective Chinatown Volume 2 is doing good business in China, since its release on February 16 and rules the box office chart. It will also turn out to be a tough competitor for Bajrangi Bhaijaan when it will enter in the third week and face Salman Khan film.

Altogether, Bajrangi Bhaijaan big preview will be held in China on February 25, which will be helpful for this film.