Salman Khan starring Bajrangi Bhaijaan has surprised everyone on its 24th-day advance booking in China. On February 28, 2018, the admission for this film in China was around 20000 but after the completion of March 1, the admissions are 104270 and still counting. 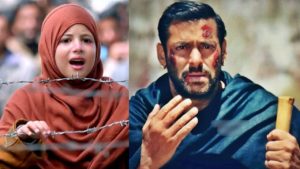 On english.entgroup.com, Bajrangi Bhaijaan has seen unbelievable audience growth in last 24 hours. Out of 100000 admissions, 80 percent of admissions were booked on March 1. It had around 13k shows until February 28 and by the end of March 1, it is around 19k. Bajrangi Bhaijaan was confirmed for release in 8000 screens and around 25ooo shows in China. These shows are lower than the likes of Dangal and Secret Superstar.

Lately, Salman’s film has received 9.1 stars average rating on Chinese ticket booking site maoyan.com. This simply means that audience is liking the film in a big way. On Douban.com, Bajrangi Bhaijaan has already received 8.6 rating from over 70 thousand people.

Till now, Bajrangi Bhaijaan has already earned $ 0.52 million (3.39 crores) from advance booking. As per maoyan.com prediction, this film can easily earn $ 1.2 million (7.82 crores). It looks like this film can open up around 8 to 10 crores on day 1 in China. This film will face a clash with 7 other big films at the Chinese box office, which includes, Peter Rabbit, Operation Red Sea, Amazing China and Detective Chinatown Vol2.

Altogether, Bajrangi Bhaijaan gets positive reviews till now and it is expected that this film will easily earn over 100 crores and go on to even touch 400 crores.