Akshay Kumar is one of the consistent performers in the last 25 years of his career in Bollywood. In the last few years, all his movies are working fine in spite of a shoestring budget. At the latest, we heard that the Baby star will work on Gold Film from July 2017. 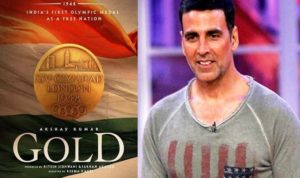 This film is based on India’s first Olympic Win in Free India in 1948. India got this medal in Hockey. In the film, Akshay Kumar will essay the role of the Hockey team captain. The film will also consist of actors like Kunal Kapoor, Amit Sadh and Sunny Kaushal in key roles. This is yet another patriotic films on the likes of Airlift, Rustom, Baby and many more.

In the last two decades, Khiladi Kumar has shifted his genre from action movies to comedy movies and now patriotic ones. Akshay Kumar was last seen in Court Drama movie, Jolly LLB 2. Subhash Kapoor movie did well and rake a collection of 117 crores. Currently, he is busy in the shooting of his forthcoming film Padman, which is based on a social subject. It is a biopic film based on the life of Arunachalam Muruganantham, who started preparing low-cost sanitary napkins for poor village women in South India. The film will star Sonam Kapoor, Radhika Apte and Amitabh Bachchan in a special role. Apart from this, he is also busy in promotion his another social issue based movie named as Toilet: Ek Prem Katha. The film is slated to release on August 11, 2017, which also stars Bhumi Padnekar as a leading lady.

Taking about the Gold movie, a close source to the film said to a news daily, “Sandeep Singh trained the actors for a few months before they flew off for the international schedule. The Arjuna Awardee who took over as captain of the Indian national team in January 2009, was roped in to ensure that the actors looked like authentic hockey players on the field. In Bradford, the team is also holding auditions at the city center for local actors to portray international hockey players of the rival team. An international coach has been hired to train them there.”

Produced by Ritesh Sidhwani and Farhan Akhtar, Gold movie is set to release on August 15, 2018. Altogether, we are happy to see Akshay Kumar in sports-based Gold movie.

What are your thoughts about this movie? do let us know in the comment.