One of the biggest Indian release 2Point0 movie is all set to hit the mainland China in May 2019 as reported by Lyca Productions. This is certainly a big news for all Indian fans and I am sure this film will rock at the Chinese box office.

As per the Lyca  Productions Statement, 2Point0 to release in 10,000 Theaters (56,000 screens including 47,000 3D screens) in May of 2019. It is by far the biggest ever Chinese release for an Indian film. It is also the biggest 3D foreign film release in China. China’s popular distribution company HY Media will distribute the film in mainland China. 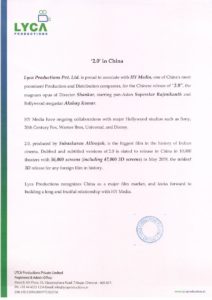 Directed by S Shankar, this film stars Rajinikanth, Akshay Kumar, Amy Jackson and many more. It was released in India on December 21, 2018 and it is still running successfully. The exact release date will be finalise in early 2019.